Dwarven Warrior/Gladiator of the Rakers

Belrum has had a dark and complicated past. He was born among a fine clan of Rakers Dwarves that were known for fine weapon and armor smithing that had magical properties and were often identified by the ruby gems inlaid in the hilts and bases of their weapons. Due to the wealth of his clan – they were raided by a much larger and evil clan of Dwarves that were known as the Black Iron Clan.

Belrum was very young at the time of the raid. His clan although small – were very adept at combat and took a great many of the Black Iron Clan down in the fight – but their numbers seemed endless. It is believed that some of his clan lived through the huge raid but he is unsure of many details. He was put into slavery by the Black Iron Clan very early in his life. He was just old enough to do work but not really old enough to have too many memories, unless his memories were just blacked out over time from sadness of missing his clan.

Belrum worked deep in their mines. His job initially was to haul heavy rocks from the depths of their mines and he was on the crew of slave dwarves that had to haul the dead bodies out from underground combats in the Black Iron Clan dwellings.

It was not long before Belrum had built immense strength. He never really got a proper education other than talking among his fellow enslaved dwarves. Some of which may have been his very own clan – but he had no way of knowing for sure. They were not allowed to bond or to communicate too much with one another. All of the slave dwarves were threatened with life threatening torture if they did not keep in line.

The Black Iron Clan were evil dwarves of the worst sort. Every kind of seven deadly sins was played out in full through the lives of this heartless and twisted folk. They were known for slavery of all types of humanoids but found most pleasure in enslaving dwarves and pitching them into underground Gladiator arenas to fight other captured humanoids and foul beasts. They would gamble and cheer as death and carnage played out before them. They loved watching the act of death and bloodshed, especially if they were on a winning streak of their betting.

Belrum was chosen to be a gladiator in these fights because of his brute strength. Belrum, having felt disconnected from everything that he ever loved became a beast of battle over many years. Belrum never really felt a need to escape because he felt there was nothing out in the world for him. He found some identity in fighting in the pits, cages, and arenas. It was all the he lived for.

He recalls the most ferocious battles were against a hybrid race of what appeared to be red skinned Ogres. They had unusual strength and intelligence that was not common among typical Ogres. They would willingly enter into the gladiator fights and place bets on their own race. They intermingled with the Black Iron Clan of dwarves a great deal.

Belrum was well liked by a handful of these red Ogres because of his ability to fight. And after a great battle with one of these brutes – Belrum and the Red Ogre that was called by the name Krolltock – Krolltock knocked Belrum unconscious and at the same identical moment Belrum served a fatal blow with a large maul to the head of Krolltock and they both fell in exact unison to one another. It was remembered as one of the greatest pit fights in those days. Belrum – found some favor among some of the leadership of the red brute hybrid Ogres after that battle – although at the time – he did not realize this. Belrum didn’t think they had care for any living beings, including their own, or even their own lives.

Belrum while unconscious had a vision of what appeared to be a Deity – and he was told that the name of this Deity was Gendwar Argrim – and he was communicated with in this vision that Gendwar had chosen him to be a champion of his name and then one day – Belrum would sit among the tables of the Gods. Gendwar expressed in his vision to Belrum that he would provide his freedom through the aid of the Red Ogres and they would set him free. That was followed with visions of discovering the magical weapons and armor of his people – and then live a life mission of destroying the creatures that are evil and that would enslave the dwarven races. Later Belrum is to become an adept warrior and learn the ways of valiant battle and war. Lastly – it was expressed to Belrum that if he should agree to follow Gendwar Argrim – that one day – he will meet with fate and he is to die a valiant death after bringing much death and destruction to these evil races and he would dine and drink among the halls of the great Dwarven Gods forever.

Things later went exactly as Belrum had envisioned. The Red Ogres set Belrum free and snuck him out of the hold of the Black Iron Clan. They set him free out of respect for his many years of great pit fighting.

Belrum knew exactly what he must do next. Belrum – with very little possessions began the process of becoming the great warrior that he is destined to become and fulfill the wishes of the Deity that gave him hope and purpose and made possible his freedom from the Black Iron Clan through divine intervention. 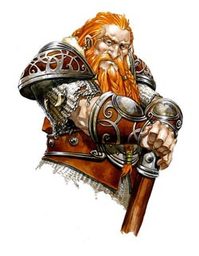