Roycean is a middle-aged (age 34) human male. He stands about 5’10" tall, has dark brown hair and is clean shaven with brown eyes.

He wears a full suit of chainmail armor, as well as a padded jack over that. He has a shield that carries the heraldic symbol of Lord Haethius Meltorik upon it because Roycean is Haethius’ Village Beadle as well as a Yeoman that is sometimes called on to fulfill feudal obligation for his Lord.

Roycean is a cavalry soldier as well. He has medium lance, horseman’s mace and longsword as his primary weapons; though Roycean is also skilled with the shortbow to be used from horseback.

Roycean is the Village Beadle of Gallow’s Corner in the Viscounty of Verbobonc. He is originally from the village, and has many ties in the village. His father still lives there; though his mother long ago passed on. His older brother was killed at the Battle of Emridy Meadows, and Roycean has been the village Beadle since that time.

Roycean is acting Clan Head of the Gall family (which long ago assumed this name in honor of their village). His father Royce Gall is not thought to live much longer, and is often tended by Roycean’s wife or daughter. 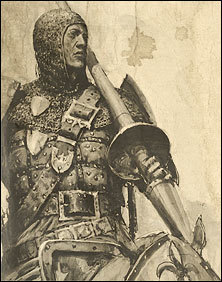